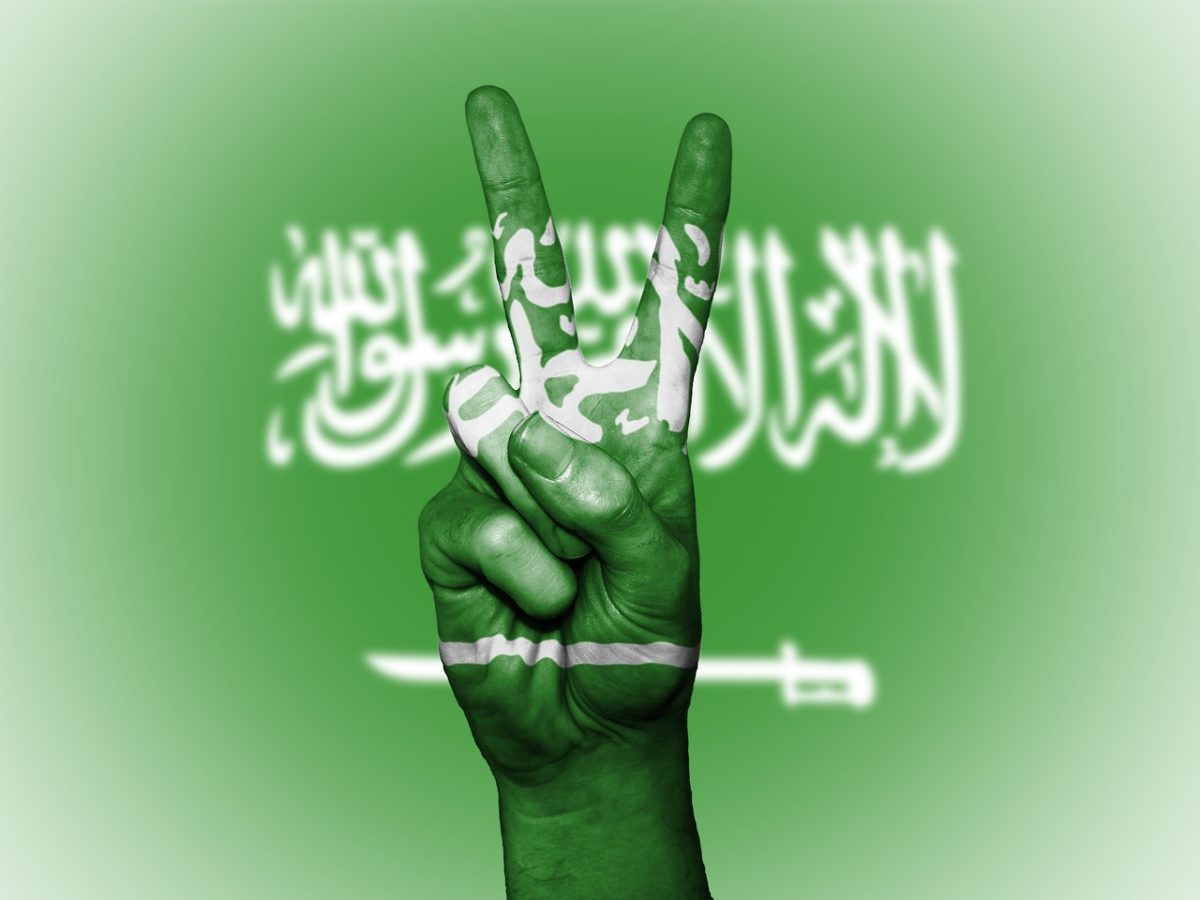 Saudi Arabia is a fledgling country, covering most of the North and Central Peninsula. It is heir to a prosperous history. The Hejaz, the cradle of Islam, and the site of this religion’s holiest cities, Makkah and Madinah, are situated along the Red Sea, in its western highlands. An area is known as Najd, the country’s geographical heartland, had been inhabited, until recently, by the nomadic tribes. To the east, along the Persian Gulf, there is an abundance of oil fields that, since the 1960s, have correlated Saudi Arabia with their oil wealth. All three — culture, tribalism, and vast wealth — have fueled the country’s subsequent development.

The Arabian Peninsula has been supporting agriculture, herding, and hunting for thousands of years. Numerous civilizations, including those of Mesopotamia, Egypt, Greece, Rome, Byzantine, India, Persia, and China, have reached the ancestor of Arabia through important ancient trade routes. In the western Arab cities of Makkah and Madinah around 610 A.D., the Qur’an, the Holy Book of Islam, was revealed to the Prophet Muhammad. The emergence of Islam is one of the most important events in history.

The Kingdom of Nejd and Hejaz was a dual monarchy made up of a multitude of dominions and tribes. In the early 1900s, the ruler of Nejd, King Abdul Aziz, reclaimed his family’s ancestral hometown of Riyadh and began nearly three decades of territorial expansion in the region. By 1932, his forces were able to take control over most of central Arabia, and he changed the name of his kingdom to the name of his family, the House of Saud. The Saudi National Day celebrates the passing of that royal decree and is now a public holiday in the Kingdom. The Saudi National Day is enthusiastically celebrated in all major cities of the Kingdom with ethnic dances, local festivals, and other cultural activities. 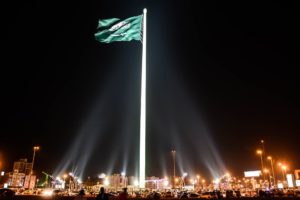 Saudi Arabia did not have an anthem in 1947, so when King Abdulaziz visited Egypt that year, he approached Abdul Rahman Al-Khateeb, an Egyptian composer, to develop an anthem, and “Aash Al Maleek” was created. The rhythm, a style of Arabic fanfare, is similar to those in the vicinity of other Arab states. Mohammed Talat composed the first set of lyrics for the anthem in 1958, but they were not often heard. It was in 1984 that King Fahd instructed the poet Ibrahim Al Khafaji to write new lyrics that have become the official lyrics of today. The instrumental version of the anthem is called the Royal Salute. 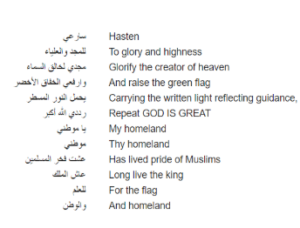 Adopted in 1950, Saudi Arabia’s emblem consists of two swords below a palm tree (honoring the Hijaz and Nejd kingdoms), that represents vitality and development, and two crossed swords that symbolize justice and strength. The Emblem appears on government documents, diplomatic missions, as well as several Saudi Arabian flags. It is emblazoned in gold on the flag of the Armed Forces of Saudi Arabia (which is also the Kingdom’s war ensign), and on the lower hoist of the Royal flag.

A green flag with white Arabic inscriptions and a sword is the Saudi Arabian flag that was officially adopted on March 15, 1973. The inscriptions on the flag are the Islamic declaration of faith, “There is no god but Allah, Muhammad (saw) is the messenger of Allah. Ibn Saud’s victories are symbolized by the sword on the flag. 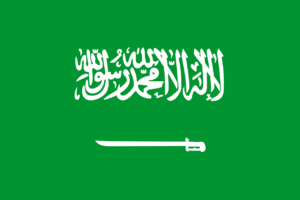 It makes sense that Saudi Arabia’s national animal is the camel pertaining to its vast desert regions. Often known as the “ship of the desert “, the animal has been used for millennia as a means of transportation by nomads. Having a life span of 40-50 years, camels can withstand desert heat and survive with minimal food and water. 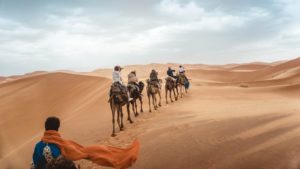 Hard to believe, but these animals can be found in parts of KSA!!! 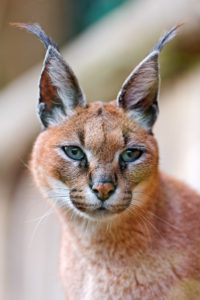 The date palm tree is the national tree of Saudi Arabia, as a desert tree, it thrives in bright, full sun locations, and is also quite drought-tolerant, as its deep roots will travel far to seek water.” The Royal jasmine happens to be the official national flower of the kingdom. 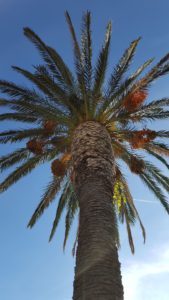 Falcon is the national bird of Saudi Arabia. They are commonly known as “Hunting Dogs of the Sky.” Falcon is by far the most powerful, huge and majestic bird of all species of birds. 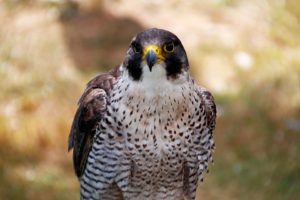 Sports in Saudi Arabia is an essential part of its culture and the country participates in many international sporting competitions. Although the traditional sport is Camel-racing the national game happens to be Football.

The National Dance is the Sword Dance, known as the “Ardha”. Men carrying swords stand in two lines or a circle, with a poet singing in their midst, performing the traditional Sword Dance. The term ‘Ardha’ is derived from the Arabic verb ‘ard’, meaning ‘to show’ or ‘to parade’. The Ardha dance recalls the battles, wars, and victories led by King Abdul Aziz Al Saud, the founder of Saudi Arabia. It is also considered as a symbol of the re-pledging of allegiance to the King. 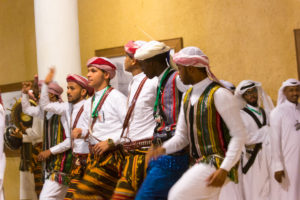 In general, Saudis wear modern adaptations of traditional designs. The loose, flowing traditional clothing is practical for the warm, wind-swept climate of the Kingdom, at the same time symbolizing the Islamic ideal of modesty.

Men wear a wool/cotton ankle-long shirt called a thawb. They wear a large square of cotton (ghutra) on the head, which is folded over a skullcap (Taqiyyah), and secured in one place with a cord (igaal). The flowing, full-length outer cloak (Bisht), generally made of wool/camel hair, completes the outfit. Women usually wear a black outer cloak (abaya) over their clothing, which may well be modern in style even in today’s society. Traditionally, Saudi women wear a black Shayla over their heads, a belt tied over their heads. Traditional dress is often richly decorated with coins, sequins or brightly colored fabrics.

Jewelry has been an essential part of Arab fashion for decades. This reflects a social and economic rank rather than a mere decoration. It was a convenient form of wealth and security for the Bedouins. Modern Saudi women wear ornaments with a blend of traditional and contemporary diamond designs and a variety of precious metals.

Traditional staple foods include dates; goat, camel, and cow’s milk; ghee, cheese, and other dairy products; bread and other foods from wheat, millet, and barley; squash, eggplant, okra, pumpkins, beans, leeks, onions, and a few other vegetables; mint, coriander, parsley, and cumin; and occasionally mutton, goat, or camel meat and, on the coasts, fish. Elderly people remember the food of the past as simple but adequate, with no morsel wasted. Meals today are eaten later, and the foods are more copious and elaborate.

The arrival of a guest at one’s home is an event that leads to a special meal in honor of the visitor. Traditional etiquette requires that sheep, goat, or camel be sacrificially slaughtered for a meal, and this is still often done. The meat is boiled in large pots, and part of the soup is passed between the guests, and the rest is poured over large trays of rice and on top of which the cooked meat is placed. 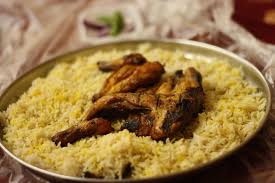 Saudi Arabia’s culture is characterized by its Islamic heritage, its historic position as an ancient commercial center, and its Bedouin traditions. The Saudi culture has evolved over the years, changing with modernization Saudi Arabia’s cultural dimension is represented as follows:

A number of organizations have been set up across the country to protect the cultural heritage of Saudi Arabia. One of the largest of them is the Ministry of Culture and Information of the Ministry of Culture, which supports a wide range of cultural activities, including literature and theater groups, storytelling workshops, museum festivals, arts and crafts, and science projects. Many clubs offer Saudis the opportunity to cultivate different artistic talents. The Saudi Arabian Society for Culture and Arts; and The King Fahd Cultural Center, play a key role in the artistic life of Saudi Arabia.

Saudi traditions are embedded in Muslim teachings and Arab rituals. The crest of the year is the holy month of Ramadan, followed by Eid ul Fitr and the season of Hajj (Pilgrimage), followed by Eid ul Adha and the other national holidays. Arab traditions also have an important role to play in Saudi life. Over the millennia, these age-old traditions have evolved and are highly respected. These include kindness and hospitality provided to strangers, friends, and relatives by every Saudi individual. Arabic coffee is known as “Gahwa” is the simplest form of hospitality–its preparation alone is a sophisticated cultural tradition, and it is often served with dates and sweets in small cups. The burning of incense (oud) to welcome guests is another gesture of hospitality.

The annual Jenadriyah National Cultural and Heritage Festival is a recognition of Saudi Arabia’s cultural heritage. “Al Ardha,” the kingdom’s national dance, is one of Saudi Arabia’s convincing traditions. It is an ancient Bedouin practice that is based on this sword dance: drummers beat rhythms and poets recite verses as shield-carrying men walk shoulder to shoulder, swaying. The festivals also feature the reading of poetry by established poets.

The hollow-drum is also an important instrument in traditional and tribal practices. “Samri,” in particular in the eastern region of Saudi Arabia, is a popular traditional music and dance form in which poetry is sung. In Arab cultural life, poetry is particularly important and has long been considered to be one of the most important forms of literary art. This is a way to preserve the history, customs and social values of the nomadic days of the Bedouins. Poetry remains popular with the Saudis even today. 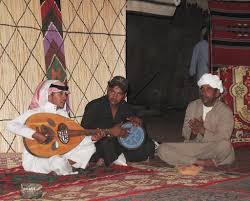 There is something very intriguing about exploring culture, there is always more than meets the eye. Don’t look at it, try and actually see it. Once you see it, you will understand it too.

“Travel to regulate the imagination of reality, and instead of dreaming about how things can be, just see them as they are”